All SMUD buildings are closed. Payments can be made in My Account or by calling 1-888-742-7683. We aren’t disconnecting power due to non-payment through Jan. 4, 2021 and have tips to avoid scams. Read our latest COVID-19 updates.

Solar financing options for your home

Learn what options you have to finance your solar system and see what incentives we offer to new solar customers.

Purchasing a solar system for your home means paying for the system up front or financing your purchase through a bank loan. You own the system and are responsible for the maintenance and repairs of the system. The purchase of a system will help increase the value of your home and provide tax credits and other deductions.

Things you should expect from a leasing or PPA agreement

The payback time on your solar system is determined by many factors, most importantly the amount of your current electricity bill. Customers with lower bill amounts typically have a 20-plus year payback period. Customers who have larger bills may see a return on their investment in as little as 7 to 10 years. 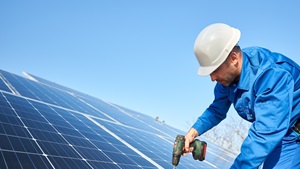 SMUD offers a residential incentive of $300.00. The application process to receive incentives for your solar power system will be handled by your contractor. If you are installing the system yourself, you can submit the application through SMUD PowerClerk website.