The massive $291 million Twin Rivers redevelopment project calls for six phases of development: Phases 1 and 2 of the project will include construction of 173 apartment units. The Twin Rivers project is bordered by Richards Boulevard, Dos Rios Street, Louise Street/Eliza Street and North 12th Street. In January 2018, demolition of 61 existing buildings will begin, with the remaining 33 existing buildings set to be demolished starting in June 2018. The project completion date is scheduled for fall 2022, and will feature a total of 487 apartment units. This project is in partnership with the Sacramento Regional Housing Authority (SHRA) and the City of Sacramento.

According to Levrant, the project will provide much-needed new housing to hundreds of the area’s most vulnerable residents. Although the project includes demolition of existing housing, all current residents are being provided with relocation assistance, and will be provided the opportunity to return to the site of the new Twin Rivers project once the apartment units receive occupancy permits from the City of Sacramento.

Another exciting development in this project was McCormack Baron Salazar signing a ‘Letter of Interest’ with SMUD to make this new multi-family housing project “all-electric.” After consulting with SMUD’s Commercial Development, Customer Solutions and Research & Development teams, the developer opted to eliminate all natural gas to the project site and will instead install all-electric cooking, space heating and water heating technology.

The Commercial Development team enjoyed a great 2017. Over the past year, building activity in the Sacramento region has boomed, and SMUD responded to the increase in overall developer activity. SMUD collaborated with the development community to provide solutions to complex issues that arose with their unique projects. From urban infill projects to workforce housing and boutique hotels, Sacramento is growing. Here are some highlights from 2017.

The beginning of 2017
SMUD hosted our first ever developer meet and greet breakfast at the Golden One Center. We had over 60 attendees, including local developers, SMUD Board Members, SMUD executives and the Commercial Development team.

June 2017
Construction activities started in the Folsom South planning area. This mixed-use development area is located immediately south of Highway 50, bordered by Prairie City Road on the west, Highway 50 on the north, White Rock Road on the south and the Sacramento County/El Dorado County boundary on the east. These developments will bring 10,000 homes into Folsom over the course of many years and 3.6 million square feet of office/commercial space. SMUD is working with the Folsom South developers to bring 69kV and Substation facilities to the area to serve the future electrical needs. 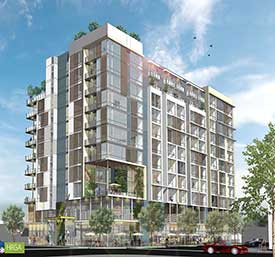 Mohanna Development broke ground on a landmark project in Midtown. The project, 19J, is comprised of 173 “small and smart” residential units, and 7,000 square feet of ground-floor retail. The 11-story tower is located on the corner of 19th and J Streets will have a dramatic effect on the Midtown core, offering apartments that are affordable, sustainable and simple. The Mohanna Development Company‘s goal is to provide a housing type that appeals to the area’s workforce by offering communal spaces, car and bike sharing services, bike storage and the ideal location for walking or using public transportation. 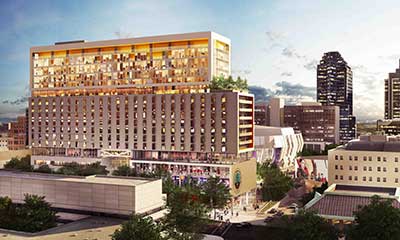 October 2017
Sacramento welcomed a brand new upscale project in the downtown core, next to the Golden One Center. The Sawyer Hotel opened just in time for the 2017 Sacramento Kings basketball season opener. The project consists of 250 hotel rooms, 45 condominiums and ground-floor retail. The SMUD team worked collaboratively with the developer team to build a custom underground vault to house transformers for the project. In the coming months, Punch Bowl Social, Urban Outfitters and Echo & Rig Steakhouse are scheduled to open.

In our last newsletter, we reported SMUD’s resource mix and how SMUD’s ownership and operation of the Upper American River Project (UARP) gives us the ability to provide operational flexibility, system reliability and economical, clean power generation. As part of that operational flexibility, did you know that SMUD operates a 500 megawatt natural gas-fired Power Plant as part of SMUD’s strategic energy portfolio?

The Consumes Power Plant (CPP) is a natural gas-fired facility that generates electricity to power approximately 450,000 single-family homes. CPP is situated on about 38 acres next to SMUD’s decommissioned nuclear power plant on an overall 2,480-acre site owned by SMUD in Herald, CA.

CPP began commercial operation in 2006, and is composed of a 500 megawatt natural gas-fired combined cycle generation plant. The facility allows SMUD to generate more of our own power, ensuring a reliable energy source.

In response to the California energy crisis of 2000 and 2001, SMUD’s Board of Directors took steps to avoid similar disruptions in the future. SMUD formed a “control area” to shield our customers from potential power shortages outside SMUD’s jurisdiction. This culminated several years later in the opening of the Consumes Power Plant, an ultra-efficient natural gas plant that’s now powered partly by renewable biogas. CPP uses all the gas collected from the Sacramento Regional Wastewater Treatment Facility as part of its fuel mix. The plant generates electricity by burning natural gas to turn combustion turbines, using technology similar to a jet engine. Waste heat from this original combustion process is captured in a boiler known as a heat recovery steam generator. The steam generated in the heat recovery steam generator turns a steam turbine where more electricity is generated. This waste heat cycle is what is called “Combined Cycle.”