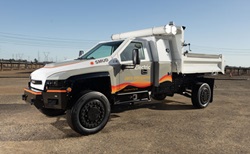 The California Mobility Center began operations at the Depot Park facility in South Sacramento. SMUD is a founding member of the CMC, a non-profit, public-private innovation hub that provides early-stage mobility companies from around the world with a path to commercializing their products.

SMUD CEO Paul Lau was invited by Congress to share details of 2030 Zero Carbon Plan before the House Select Committee on the Climate Crisis. In his testimony, Lau spoke about how SMUD’s plan extends beyond carbon reduction by improving local air quality, creating jobs and providing health and economic benefits to all customers, including those living in historically underserved communities.

While the Bootleg Fire in Oregon impacted critical transmission lines from the Pacific Northwest, SMUD avoided rotating blackouts and Public Safety Shutoffs during a precarious month for energy markets. SMUD encouraged customers to conserve power during the height of the heat storm and was able to send excess energy to neighboring utilities experiencing shortages.

The Caldor Fire in El Dorado County came within a mile and half of reaching Fresh Pond, the nerve center of SMUD’s hydroelectric operations. SMUD facilities avoided the inferno that wound up burning 220,000 acres and crossed the Sierra Nevada into the Lake Tahoe basin.

SMUD’s partnership with Habitat for Humanity of Greater Sacramento stepped into the future with the construction of an all-electric housing development in South Sacramento. The 13 homes in the Mandola Court neighborhood feature all-electric appliances, solar panels and electric vehicle charging capabilities.

The annual SMUD Cares employee giving campaign kicked off with an online auction and volunteering opportunities that included a Habitat for Humanity neighborhood revitalization event in South Sacramento. The 2021 SMUD Cares campaign raised more than $380,000 for local non-profits.

The SMUD Museum of Science and Curiosity (MOSAC) opened its doors in November and attracted 2,500 visitors on the first weekend.  The conversion of the old powerhouse along Interstate 5 on the Sacramento Riverfront into a state-of-the-art science museum was more than a decade in the making.

SMUD secured more than $41 million in government financial assistance for residential customers who hadn’t been able to pay their bills due to the economic impacts of the COVID-19 pandemic. SMUD was the first public utility to receive funding from the California Arrearage Payment program.