The role of SMUD’s Commercial Development team is to build relationships with you, Sacramento developers, and to engage with you early and often. When we do this successfully, we’re helping SMUD’s technical teams get ahead of new development projects to streamline the development process for all involved.

We’re encouraged by the signs of real estate growth in the Sacramento Region. SMUD’s seen an increase in construction activity in all parts of our service territory. As the real estate market improves, we’re engaging with developers on increasingly creative and complex projects that are challenging us to work collaboratively internally and externally. We want you to clearly understand your options, limitations, costs, lead times and the status of your projects. Our goal is to be one of the best partners in the region to do business with.

The best way to take advantage of our services is to involve us as early in the process as possible. If you’re planning a project in SMUD service territory, email us or give us a call at 1-916-732-5448.

We’d like to take a moment to offer our condolences to the family of Ali Youssefi of CFY Development. Ali passed away just a few short weeks ago and his loss has been felt deeply by all who knew him. We were fortunate to have worked with Ali for many years on a variety of projects, including the Warehouse Artist Lofts, the 700 Block of K Street, the Bel-Vue apartments, Market 5-ONE-5 and many others. Ali was incredibly bright and, at the same time, incredibly humble—we will truly miss him. In a very short time, he left a permanent, positive mark on Sacramento that will be enjoyed by all who live and work here for decades to come.

Our regularly featured Developer Spotlight will return in the next Developer Connections newsletter.

Your opinions and comments matter to us

SMUD’s Commercial Development team is getting ready to launch our second annual “Developer Satisfaction Survey” coming up in April. We’re looking forward to your comments, perspectives and recommendations.

We recognize that you’re busy with important commitments and project milestones. That’s why we’re keeping it short; the survey will take only 5 minutes of your time. Your responses are essential in letting us know how we’re doing today and what we need to do tomorrow to continue improving our service to you.

The survey will be emailed to you on Monday, April 16, and to keep the wheels of progress rolling forward, the response window will be 2 weeks.

After the survey closes, SMUD’s market research team will compile the results and summarize the major themes (comments or suggestions for areas of improvement). To ensure transparency, we’ll provide you survey highlights in our next Developer Connections e-newsletter.

Thank you in advance for taking a few moments to respond to this important survey.

Over the past decade, more than $1 billion in public and private investments have been made in development projects in Central City. To keep up, SMUD’s working hard and smart, across all areas of our business to ensure that we can provide safe, reliable and affordable electricity to power the flurry of development underway in Sacramento. 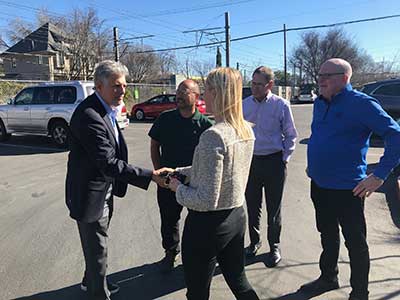 Our Commercial Development team recently shared some development hot spots with a number of our Board members and executives during a guided tour in the Central City.

SMUD Board Members Dave Tamayo, Bill Slaton and Rob Kerth and 5 executives, along with Commercial Development team members, went out into the field to hear directly from developers themselves. At the 7 stops, developers talked about a total of 37 planned projects.

SMUD’s Chief Energy Delivery Officer Frankie McDermott said, “It was a great opportunity to see first-hand all the progress that’s taking shaping in Central City. Sacramento is experiencing more growth than we’ve seen in years, and I’m proud that SMUD’s there to help developers move quicker and more seamlessly toward project completion.”

on the tour, which included more than 2,000 units of new housing and 8 million square feet of new development.

The tour also included a close-up look at progress at the Ice Blocks, located at 17th and R Streets. It was hosted by Heller Pacific and Vice President of Construction and Development, Kaitlin Murchison.

It included a briefing by restauranteur and developer Randy Paragary, who shared his vision for the $20 million dollar boutique Fort Sutter Hotel project planned at 28th and Capitol. Other stops where developers hopped on the bus to talk about their projects were:

In late December, SMUD shipped 15 utility trucks to Louisiana on a barge heading to Ponce, Puerto Rico. Once the barge arrived, the trucks were off-loaded at Ponce’s port where more than a dozen SMUD lineworkers were flown in to begin restoration efforts.

Take a look at SMUD crews gearing up to head to Puerto Rico.